There’s something enduring about old horror film advertising; part hucksterism, part shoulder shrug, the viewer didn’t always get quite what was advertised. Case in point: two new Blu rays from Severin Films, Massacre in Dinosaur Valley and Cruel Jaws; the former has no dinosaurs, and the latter is hardly cruel, unless it’s to hardcore Jaws fans who couldn’t bear to see their story desecrated. Yes, this was my feeble attempt to link the two thematically before exploring them individually! I hope you enjoyed it. Let’s take a look at each:

Massacre in Dinosaur Valley is a little light on massacres per se, but it does offer up plenty of exploitation goodness from Italian writer/director Michele Massimo Tarantini (A Policewoman on the Porno Squad); those looking for something along the same wavelength as Cannibal Holocaust and Cannibal Ferox, however, may be disappointed, as this is a kinder, gentler version of events. Oh yes, MiDV wants to be part of one of the gnarlier sub-genres, but doesn’t have the fortitude to go full bore. What we have then is an anomaly, at least for me: the more it dials back the entrails, the more I enjoy its cut-rate Raiders vibe, wooden lead (Michael Sopkiw - Monster Shark), and mammary melees. Sometimes grue gets in the way.

The story is as old as videotape: a group of fossil hunters are hunted by cannibals after their plane crashes in the jungle. That’s basically it; and anyone going to watch this film won’t be looking for twists or a steamy romance. No, fans of these films are usually just looking for everything that MiDV offers up—hunky actor, gratuitous nudity, gore. Which they get, but as I said, the red is somewhat muted compared to others, and frankly, it’s not needed anyway. MiDV is certainly closer to Cannon than Cannibal Holocaust; who says Cannibal films can’t be fun?

Valley Boy is a lengthy, engaging chat with Michael Sopkiw about his involvement in the project, the fourth and final with the production company; whether haggling for overtime to tales of behind-the-scenes shagging, it’s an entertaining look from a man who enjoyed the ride. Lost in Brazil is a lively chat with legendary Italian screenwriter Dardano Sacchetti about his relationship with Tarantini, and his original idea of... well, let’s just say you would have had dinosaurs if Sacchetti had his way. But the movie we’re left with aligns with a time of derring-do and lost treasures, with a sprinkle (okay, a splash) of grue for comfort. A perfect change of pace.

As for Cruel Jaws, it’s easily the more notorious feature. Long out of bounds due to the illegal use of footage from the Jaws series of films (among others), I’m unsure how Severin pulled it off; others have tried and failed. But here by the grace of David Gregory et al. go I, and Cruel Jaws floats to the surface as an enjoyably trashy heist of a movie, with an abundance of moxie from Bruno Mattei (Shocking Dark), here operating as William Snyder (hence the inclusion of the Japanese release, dubbed the “Snyder Cut”).

This is Mattei’s modus operandi, at least of the films I’ve seen: he rides that zeitgeist long after the wave has crested, his bloody surfboard hitting the sand and causing a scene. Always causing a scene, which is the point; take from here, borrow from there, steal as you must, but entertain. And without fail, Mattei delivers. Cruel Jaws may just be his opus. (Use opus however you want!)

The story is of course Jaws Redux with some 2 and 3 thrown in; Florida, a Regatta, a Sea World-ish park, a corrupt mayor, a group of frisky teens, and away you go! Except this is Mattei, so you also get, at no extra charge, a Hulk Hogan impersonator as your lead (Richard Dew as Dag Snerensen!), and a cute little girl in a wheelchair, just because.

What I’m saying is Mattei fills the screen with a) what he believes people want to see, filtered through a decidedly warped vision of Americana, and b) whatever the hell he sees fit. It’s not enough to hunt the shark once, or twice, but rather four times; whole subplots where we follow the ostensible villain of the piece and his girlfriend around; and of course, the old Property Swindle Ploy: raise the money or lose the park! That’s a lot to cram into a fish flick.

But Cruel Jaws is ridiculously fun, no matter what angle you come at it from; piecemeal thievery, where you can play spot the movie; watching a half size Hulkster crushing beer (and sharks) in his cargo shorts; and last but not least, a nod to John Williams, whose themes to Superman and Star Wars are sure to stir the crowds. My god, I love me some Mattei. Let’s look at the special features:

Okay, first up, that darn Snyder Cut. About a minute longer than Mattei’s, this Japanese version has about a minute more of gore; however, the Mattei version is much cleaner and preferred by me. So cool that it’s included here, though. Next up is The Great White Way, a terrific primer on Sharksploitation from our leading Horror Doctor, Rebekah McKendry; informative, fun, I could have a whole doc of her talking this stuff. These Things Got Made! finds actor Jay Colligan (one of our bad guys) affectionately reminiscing about being young, inexperienced, and just having a blast in Florida. Rounding out is the theatrical trailer.

I don’t know what to tell you: Cruel Jaws, in all of its cross-stitched craziness, is damn near perfect. Perfect for watching with buds (whenever that happens again—soon, yes?) or as a solo, life-changing event, Severin comes through yet again as The Arbiter of Bad Taste. Long may they reign. 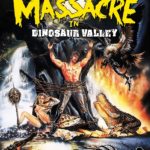 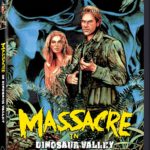 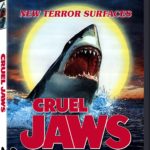