Softcover Edition of Clark Collis’ YOU’VE GOT RED ON YOU: HOW SHAUN OF THE DEAD WAS BROUGHT TO LIFE Gets New Artwork, September Release

At over 400 pages, Clark Collis' You’ve Got Red on You: How Shaun of the Dead Was Brought to Life is a must-have for any fan of Edgar Wright's beloved horror comedy. If you haven't had a chance to pick it up yet, a new softcover edition is on its way from 1984 Publishing with new art from HagCult!

"Entertainment Weekly senior writer Clark Collis’ You’ve Got Red on You: How Shaun of the Dead Was Brought to Life, an anecdote-packed, 424-page look at the making of the 2004 horror-comedy, is receiving a softcover edition this September featuring all-new hand-drawn artwork by HagCult.

Collis interviewed dozens of Shaun of the Dead cast and crew members for the project, including director Edgar Wright, producer Nira Park, actors Simon Pegg, Nick Frost, Kate Ashfield, Bill Nighy, Lucy Davis, and Coldplay singer Chris Martin, as well as many of the extras who played zombies in the film. All helped to tell the story of Shaun of the Dead, from its origins as a back-of-a-taxi idea concocted by co-writers Edgar Wright and Simon Pegg to the movie’s current status as a globally-beloved pop culture phenomenon. The book also includes commentary from many of the movie’s well-known fans including directors Quentin Tarantino, Eli Roth, and Zack Snyder, and Walking Dead executive producer Greg Nicotero.

The Shaun of the Dead team initially struggled to find financial backing for the movie as executives rejected the script's mix of horror, romance, and sharp British wit. The film was eventually green-lit on a relatively small budget and after a grueling shoot in London, would become a bona fide box office hit and cult classic. Shaun launched the big screen careers of nearly everyone involved, including director Edgar Wright, stars Simon Pegg and Nick Frost, and producer Nira Park. Wright and producer Park recently also released two new films, the psychological thriller Last Night in Soho and the music documentary The Sparks Brothers, while Pegg will soon be seen reprising the role of Benji Dunn in both Mission: Impossible 7 and Mission: Impossible 8.

"I had an incredible time writing the book and speaking to all the people involved in making Shaun of the Dead, which is both a classic horror-comedy and one of my favorite films," says author Clark Collis. "But the fact that the hardcover was so well-received and became a best-seller thanks to the support of the Shaun crew and the devotion of its fans really was a slice of fried gold. I am thrilled that 1984 Publishing is putting out a softcover version with another amazing piece of artwork by HagCult."

1984 Publishing will release the new edition on Thursday, September 22 in the UK and Tuesday, September 27 in the US and Canada. Packaging is again by HagCult (Mayra Fersner), who has previously worked on official merchandise for Vampira and Halloween, along with the limited hardbound version of You’ve Got Red on You. “For the softcover edition design, I leaned more towards an illustrative style which speaks to my love of comics, pulp and, of course, the wonderful film and book.” says Fersner.

The tome also includes over 70 storyboards, handwritten brainstorming notes by Pegg and Wright, and candid photographs. Most were sourced directly from the cast and crew’s personal archives.

This updated softcover edition of You’ve Got Red on You will be released worldwide everywhere books are sold, including your local bookstore, Amazon or Bookshop in the US, Amazon or Waterstones in the UK, and Amazon in Canada. Wholesale inquiries should be made to Ingram (US/UK) and PGC (Canada)." 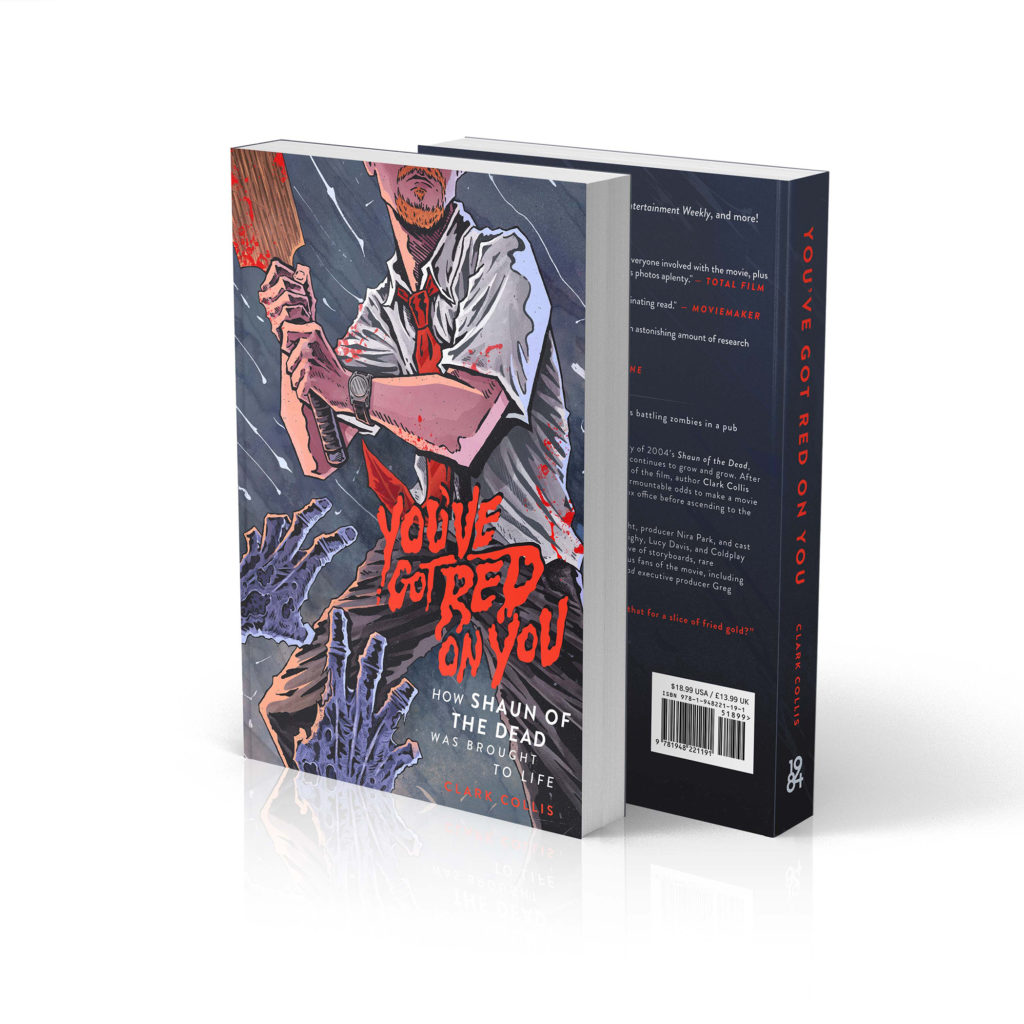