After they bring John Carpenter's They Live to 4K Ultra HD this December, the Scream Factory team will release another Carpenter classic, Prince of Darkness, on 4K Ultra HD on January 19th.

Like the upcoming They Live release, the Prince of Darkness 4K Ultra HD / Blu-ray will include the special features from Scream Factory's previous Blu-ray release of the film, and there's a website-only exclusive version that comes with a Sacred Bones record featuring John Carpenter, Cody Carpenter, and Daniel Davies playing music from Prince of Darkness.

Below, we have the official press release with more details, as well as a look at the cover art for the 4K Ultra HD and vinyl:

From the Press Release: Get ready for the ultimate presentation of the heart-pounding supernatural thriller by heralded master of horror director John Carpenter (Halloween, The Fog, They Live), as the Prince of Darkness Collector’s Edition (4k UHD/Blu-Ray™) will be released from Scream Factory™ on January 19th.

This is the first time the film has been released in 4K Ultra High Definition in North America. Prince of Darkness Collector’s Edition (4k UHD/Blu-Ray™) will contain all previous bonus features from the 2013 Scream Factory Collector’s Edition Blu-ray™ release, including interviews with Carpenter and Alice Cooper, as well as new 7.1 Dolby Atmos audio on both the UHD and Blu-ray™ discs.

Customers who order directly from ShoutFactory.com will be able to choose from two exclusive offers:

· Prince of Darkness Collector’s Edition (4k UHD/Blu-Ray™) plus an 18” x 24” rolled poster reproduction of the original theatrical art. The posters will be made at a limited quantity.

· Prince of Darkness Collector’s Edition (4k UHD/Blu-Ray™) with poster and new exclusive 7" Sacred Bones record, while supplies last. The 7" on exclusive white and red splatter vinyl via Sacred Bones features music from Prince of Darkness composed by John Carpenter and recorded by John, Cody Carpenter, and Daniel Davies. The A-side includes the 2017 version of the main title and the B-side contains a never-before-released recording of "Love at a Distance" recorded by the trio in 2020. The white and red splatter vinyl variant is a limited edition of 2,000 copies and is housed in a lavish slipcase with new art by frequent Carpenter collaborator Chris Bilheimer. 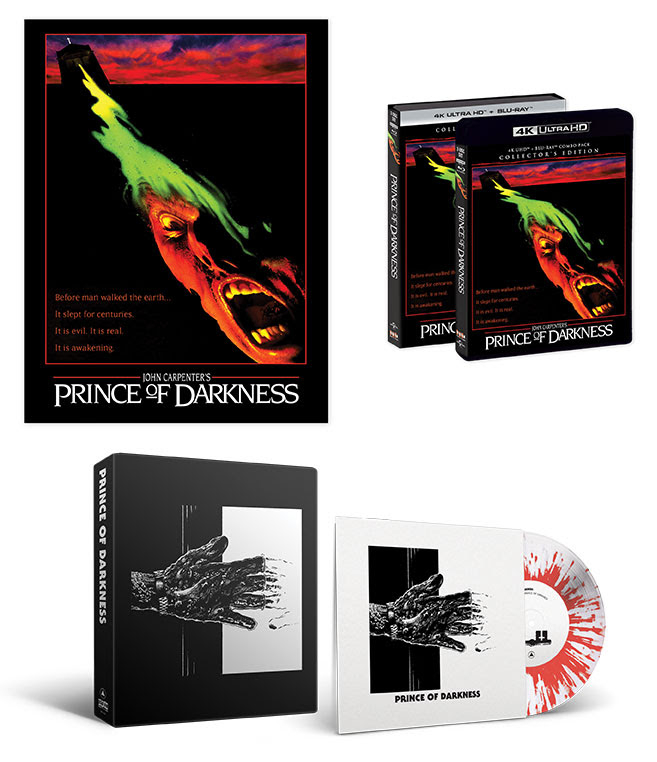