With COVID-19 vaccinations now widely available, the Popcorn Frights Film Festival is returning for its seventh year of on-screen scares August 12th–19th. This year's festival will be a combination of in-theater screenings and virtual streamings, and the first wave of programming is proof that Festival Directors Igor Shteyrenberg & Marc Ferman have once again curated a killer lineup for horror fans to enjoy!

There are also a bunch of great short films for horror fans to check out in the Homegrown: 100% Pure Fresh Squeezed Florida Horror short film competition.

You can purchase In-Theater All-Access Badges here and Virtual Passes here. As previously announced, a portion of the proceeds from this year's Popcorn Frights will go to those affected by the tragic building collapse in Surfside, Florida.

Press Release: July 8, 2021 // – Popcorn Frights is thrilled to unveil the first wave of programming for its in-theater festival experience to take place next month, from August 12-19, 2021. Popcorn Frights will be one of the first film festivals in South Florida to be hosted in-theater since the start of the pandemic and will design a safe and accessible festival experience where fans and filmmakers can safely come together to celebrate and discover the best genre films from around the world.

The festival will also celebrate Florida horror with a dedicated program spotlighting the cream of Florida’s homegrown crop. Included in this special showcase is the World Premiere of THE WELDER, a gnarly thriller shot entirely in the Florida Everglades; Mickey Keating’s new southern gothic horror story OFFSEASON, a ghoulish, tense and utterly fantastical tale set in a Florida beach town and starring The House of the Devil’s Jocelin Donahu; and the HOMEGROWN: 100% PURE FRESH SQUEEZED FLORIDA HORROR short film competition featuring the World Premieres of AMERICAN CRYPTID, AMERICAN DIABLO, IT COMES FROM OUTSIDE, and WHAT CAN BE BROKEN SHALL BE BROKEN, and the regional premieres of DEMONICA, TECH SAVVY, and TOO FAR.

Other highlights in the feature film program include the Southeast US Premieres of the nihilistically unhinged WE NEED TO DO SOMETHING starring Pat Healy, Vinessa Shaw, and Sierra McCormick; Jim Cummings’ brutal dark comedy THE BETA TEST; as well as the premiere of the hallucinatory animated thriller CRYPTOZOO.

Nothing says spooky quite like Friday the 13th, and for the first time, Popcorn Frights falls on this glorious day. To honor the fearful day, it will host a special 35th Anniversary Presentation of FRIDAY THE 13TH PART VI – JASON LIVES, which will feature several exciting surprises and giveaways to be announced at a later date.

Celebrated as the largest genre film event in the Southeast U.S. and one of “The World’s 50 Best Genre Festivals” by MovieMaker Magazine, Popcorn Frights will complement its in-theater festival program with an online virtual component for those unable to travel to the festival in South Florida. The virtual program will offer an entirely separate and unique lineup that will be available to stream throughout the United States, and which will be unveiled in the coming weeks as part of Popcorn Frights second wave announcement.

Access to the in-theater experience will be available through individual tickets or an all-access badge, which will provide an all-inclusive experience for films and special events hosted at the Silverspot Cinema Coconut Creek, Popcorn Frights official host venue this year. Separate virtual passes are also available and will provide access to every film streaming in the festival’s virtual program. To order an In-Theater All-Access Badge, click here, to order a Virtual All-Access Pass, click here.

A portion of all proceeds from the festival will go to benefit those impacted by the building collapse in Surfside, FL.

THE NIGHT HOUSE follows a widow (Rebecca Hall of Godzilla vs. Kong) who begins to uncover her recently deceased husband’s disturbing secrets.

Indie auteur Jim Cummings stars as an engaged Hollywood agent who receives a mysterious letter for an anonymous sexual encounter and becomes ensnared in a sinister world of lying, infidelity, and digital data in this gleefully over-the-top dark comedy.

In this richly-drawn hallucinatory animated thriller, Cryptozookeepers try to capture a dream-eating hybrid creature of legend, and start wondering if they should display these beasts or keep them hidden and unknown.

After a routine prison transfer crashes in the forest, a young Inuit paramedic finds herself surrounded by murderers with a mere 100 feet to climb out of a ditch to escape.

Anchored by a mesmerizing performance by Jocelin Donahue (The House of the Devil), this southern gothic horror story follows a woman who travels to a desolate Florida island town after receiving a mysterious letter and soon becomes trapped in an unending nightmare.

In this gloriously melodramatic suspense slasher, a masked killer named Pretty Boy takes a blind woman from her home in the Hollywood hills and crashes a Valentine’s Day party where the bloodshed continues as he runs amok with his butcher’s knife.

Sara Canning, Osric Chau, Gracie Gillam, and Barbara Crampton star in this wickedly twisted chamber piece about two travel vloggers who check into a vacation rental with a host that will do anything for a good review.

Finding herself the victim of a violent monster attack, a young woman launches a vigilante campaign to hunt the beast that tried to kill her, even though her family, friends, and authorities question the authenticity of her account in this biting social critiques and downright gripping horror thrill ride.

With a tornado on the way, a dysfunctional family (Pat Healy, Vinessa Shaw, and Sierra McCormick) takes shelter in their bathroom, only to end up trapped. As hours turn to days, it's clear something even deadlier is at play beyond the walls, toying with them.

In this ambitious and unsettling Florida-set horror film, a young couple travels to the Everglades for a vacation that they hope will bring them closer together. But what at first appears to be a seemingly pastoral paradise soon transforms into a sinister, dread-soaked nightmare as a vicious madman terrorizes them for his demented experiments.

After an intended victim impales the corpse of Jason Voorhees with a metal pole during a lightning storm, the deranged killer is resurrected, rising from the grave to wreak havoc upon a new group of unsuspecting campers.

Homegrown: 100% Pure Fresh Squeezed Florida Horror
This film showcase is designed to be a springboard for new filmmakers from Florida and a space that helps forge a new direction for Florida’s genre scene by further cultivating and nurturing its growing film community:

Campfire stories, passed down for generations, may give you a thrill... but you never know who (or what) is listening.

A police checkpoint turned awry takes an undocumented, deaf woman on a downward spiral into the underworld hiding beneath Miami.

A former gang member must recruit a Jesuit priest in order to help her save her younger sister, not only from the ruthless prostitution ring she fell into, but from the demon that’s possessing her body.

After she sees a mysterious figure staring at her from the window, a curious but skeptical woman goes outside in her back patio area to find who it is. Is it human or something supernatural?

A mom discovers her Photoshop program can make changes that become permanent in real life. After some friendly fun, she destroys a photo of her Ex’s prized car, inadvertently creating a disaster in need of an “undo” button.

A jokester tries to pull a prank on his girlfriend with the help of his two friends, but when a masked figure sabotages the prank, they quickly learn that someone has been the punch line of their jokes for way too long and now is taking matters into their own hands.

What Can Be Broken Should Be Broken
World Premiere

A mob hit gone awry embroils two mobsters in a series of unfortunate events too calculated to be a coincidence, leading ultimately to ruin and an act of savage revenge.

Popcorn Frights Film Festival presents the best of contemporary genre cinema from across the world as it celebrates the art of horror. The seven-day festival is Southeast U.S.' largest genre film festival and prides itself on premiering films from emerging and established filmmakers, enabling the industry and general audiences to experience the power of storytelling through genre film. 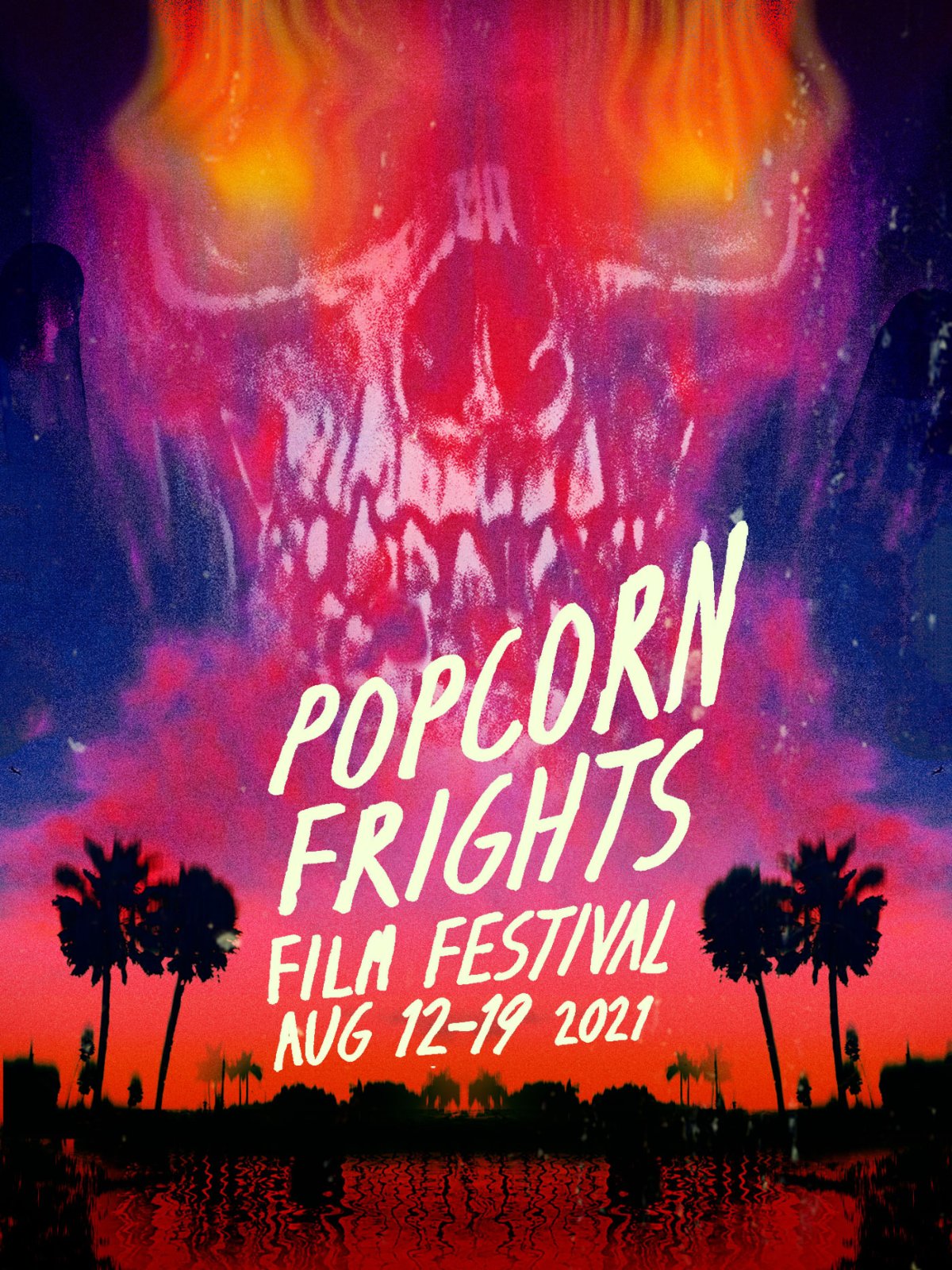