One of the five film festivals that took part in the ambitious Nightstream film festival, Popcorn Frights has an extra treat in store for Florida horror fans this October with their Wicked Weekend virtual event!

In the charitable spirit of Nightstream, proceeds from Wicked Weekend will help out the one-of-a-kind independent theater where Popcorn Frights usually takes place. Since this is a special treat for Florida horror fans, all film screenings will be geo-locked to the Sunshine State, with the amazing team behind Popcorn Frights continuing to keep horror alive and well in the region.

We have the official press release with more details on Wicked Weekend below, be sure to visit Popcorn Frights' official website for more updates, and stay tuned to Daily Dead for a special treat from the festival!

Press Release: MIAMI, FL – Hang on to your popcorn, boils and ghouls, Popcorn Frights is celebrating this spooky season with a Wicked Weekend virtual event taking place all through Halloween weekend, from October 29th-November 1st, featuring 21 film premieres, conversations, panels, and other special surprises. Come and escape into Halloween with us, it’s our favorite time of year!

Highlights from the film line-up include the World Premiere of Lionsgate’s SMILEY FACE KILLERS, written by Bret Easton Ellis and directed by Tim Hunter who reunites with his River’s Edge star Crispin Glover; Paramount’s supernatural thriller SPELL starring Omari Hardwick (Zach Snyder’s Army of the Dead); and the North American Premieres of BABYSITTER MUST DIE, THE RETREAT, HELD, THEY REACH, as well as TALES OF THE UNCANNY, an in-depth documentary about anthology horror that features interviews with Joe Dante, Mick Garris, Roger Corman, Richard Stanley, Ernest Dickerson, Eli Roth, and Tom Savini, among others.

Other films slated to premiere at the four-day virtual event include the Florida Premieres of the hair-raising chiller THE VIGIL, THE OAK ROOM starring RJ Mitte (Breaking Bad), and the gory horror extravaganzas BUTCHERS, SPARE PARTS, THIRST, CYST, and BENNY LOVES YOU. To mark the season of fear, on all Hallows Eve, there will be a special presentation of the Halloween set chillers, BAD CANDY and FOR THE SAKE OF VICIOUS. Wicked Weekend will also host the Florida Premiere of the finally completed, long-lost horror sequel GRIZZLY II: REVENGE starring George Clooney, Laura Dern, Charlie Sheen, and a killer bear.

In addition to its film-lineup, Wicked Weekend will feature several off-film events as part of its Talking Horror program, including the Tracking Terror panel with acclaimed musicians Graham Reznick and Steve Moore, and a conversation with Tibor Takács about his cult classic The Gate, which starred Stephen Dorff in his film debut.

Access to film screenings will be geo-locked to Florida with Wicked Weekend All-Access Passes on sale for $66.60, and individual tickets at $6.66. The Talking Horror program will be available for free to the public. Film selections will be available to access beginning 10:00am EST October 29, and access ends 11:45pm EST the night of November 1st. This year’s Popcorn Frights Wicked Weekend functions as a charitable event benefiting local arthouses that have been impacted by the COVID-19 pandemic.

When you can’t go to the movies, bring the movies to you! Let’s save Halloween!

When a handyman is asked to audit a house following the previous tenants’ abrupt departure, he finds a ghost who is not quite as scary as she initially appears. As a relationship develops between the two of them, we find that the ghost is just as insecure and lost as the rest of us.

The balance of power between man and animal is reversed in this scathing evolutionary flip that questions the place of animals in our societies.

When a former girl scout faces a life or death test, will she have what it takes to survive?

You might need to check your chocolate bars for razor blades as there are just as many tricks as there are treats in this pumpkin-spiced late-night anthology starring Gremlins' Zach Galligan and Slipknot's Corey Taylor.

His parents' unexpected death forces a 30-year-old to grow up overnight, and one part of this rite of passage is getting rid of Benny, the teddy bear that's been by his side since he was a little boy. It's a move that can only end in death.

A family of sadistic butchers lives deep in the backcountry. From the dead of winter to the dog days of summer, anyone who crosses their path is dead meat.

Hell hath no fury like someone insulted on social media in this bloody and hilarious revenge tale that dares to confront bullies in the most delightfully dark ways.

In the 1960s a nurse's last day is ruined when a doctor inadvertently creates a cyst monster that terrorizes the office. Consider this the ultimate Dr. Pimple Popper video, a goopy and gross-out body horror guaranteed to test your gag reflex!

An innocent nurse, a tortured maniac, and a suspicious hostage face off against a wave of violent intruders as they descend upon their place of refuge on Halloween night.

All hell breaks loose when a giant Grizzly, reacting to the slaughter of Grizzlies by poachers, attacks at a massive big-band rock concert in the National Park. Featuring Laura Dern, George Clooney, and Charlie Sheen.

This crowd-pleasing documentary centers on the fans of the Evil Dead films and explores the classic franchise's undying and ever-growing popularity.

A couple's ailing marriage is put to the test when they are held hostage in an isolated vacation rental by an unseen Voice that commands their every move.

A drifter returns home to the remote town where he was born during a raging snowstorm. While trying to settle an old debt with a grizzled bartender by telling him a story, the night's events quickly spin into a dark tale of mistaken identities, double-crosses, and shocking violence.

A man finds himself alone and lost after a horrifying encounter with a monster during a backpacking trip into the Adirondack High Peaks. Now, he must fight for his life as he battles the evil Native American legend, The Wendigo.

An all-girl punk band get lost on a random dirt road. A tow truck driver toes them to his junkyard. Everything seems normal until they wake up with weapons for limbs, and thrown into the fight of their lives.

A man crash lands in rural Appalachia and awakens in the attic of a traditional Hoodoo practitioner. He desperately tries to break free from her dark magic and save his family from a sinister ritual before the rise of the blood moon.

Tales of the Uncanny

The story of the evolution, challenges, and all-time Top 5 greatest anthologies and segments in horror cinema featuring a global roster of more than 60 horror writers, directors, and scholars that include Joe Dante, Mick Garris, Roger Corman, Richard Stanley, Ernest Dickerson, Tom Savini, Eli Roth, and Brian Yuzna. And many more!

A troubled woman befriends an elderly man who turns out to be a 1,000-year old, single and gay vampire who brings her brother to life, leading to terrible consequences.

It’s 1979, and a 13-year-old girl accidentally unleashes a demon from a vintage reel-to-reel player; she recruits her two best friends to fight the beast before it devours more souls in their small town.

A lapsed Orthodox Jewish man tasked with keeping watch over a dead member of his former community is faced with a malignant force in this distinctive, hair-raising chiller.

A conversation with Hungarian-Canadian director Tibor Takács about his 1987 horror cult classic The Gate, which marked the feature film debut for Stephen Dorff, as well as the film's sequel, The Gate II: Trespassers, and the history and rise of Canadian genre cinema.

Popcorn Frights Film Festival presents the best of contemporary genre cinema from across the world as it celebrates the art of horror. The seven-day festival is Southeast U.S.' largest genre film festival and prides itself on premiering films from emerging and established filmmakers, enabling the industry and general audiences to experience the power of storytelling through genre film. 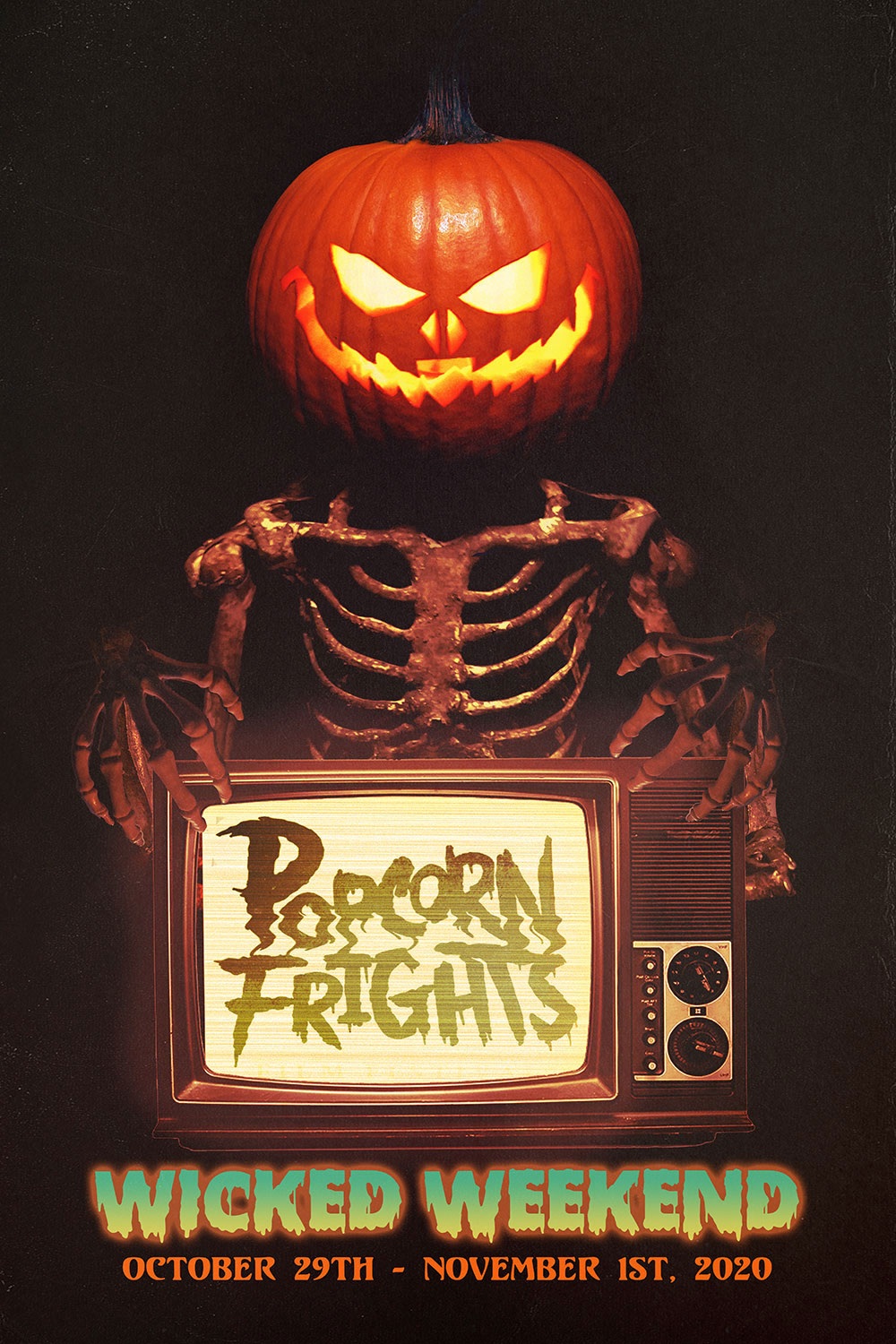