Earlier this year, we had the great pleasure of conducting a Q&A with author Mike Thorn for his debut novel Shelter for the Damned, and with his short story collection Darkest Hours: Expanded Edition also now available from JournalStone Publishing, we once again caught up with Mike in a new Q&A to discuss revamping his previous short story collection, adding in new goodies for readers, and more!

Thanks for once again taking the time to answer questions for us, Mike, and congratulations on the publication of Darkest Hours: Expanded Edition! Darkest Hours was originally published back in 2017, but you’ve been given the opportunity to revisit these stories and add plenty of new material for readers. How did this opportunity come about?

Mike Thorn: After the contract ended with my previous publisher, my agent and I began discussing possible new homes for Darkest Hours. Ultimately, we decided it would be a good idea to submit to JournalStone, and thankfully they accepted it for reissue. I had some ideas about how to turn this edition into something new and exciting, and the JournalStone crew was fully onboard. It really was the ideal scenario, and it’s nice to finally have an edition of this book that feels definitive.

When did you originally write the stories for Darkest Hours, and what was it like revisiting these stories years later and providing new author notes for each entry? Did your perspective and writing style change a lot in the intervening years?

Mike Thorn: I wrote all the stories in Darkest Hours over a two-year period, from 2015 to 2017. I completed almost every piece in the collection while I was completing my master’s degree, and I think that experience is reflected in some of the book’s recurring fixations. I had written earlier drafts of the author notes for a now-extinct blog back in 2017, and so I revised those pieces for the expanded edition.

I’ve gone through a lot of significant life changes since the book was initially released (some good, some not so good), so I believe my perspective has probably shifted accordingly… hopefully for the better! As for my writing style: it’s difficult to say. I’m always reading and learning, so the hope is that I’m getting better; I’ll leave that up to the readers to decide!

As a writer, it can always be tempting to improve previous work. How much did you alter or update the stories in Darkest Hours for this expanded edition? Did you want to preserve your earlier work as much as possible?

Mike Thorn: Yes, I wanted to basically preserve the stories as they were originally published. I certainly didn’t want to make any content-related changes; I only made minor syntactical revisions throughout (with assistance from JournalStone’s astute editor, Sean Leonard).

You mentioned in our previous Q&A that Darkest Hours focuses primarily on teenagers and young adults. What underlying themes can readers expect to encounter in this collection?

Mike Thorn: Darkest Hours repeatedly returns to the themes of addiction, anxiety, alienation, trauma, academic power relations, and the experiences of social “outsiders.”  Its aesthetic fixations draw a lot from heavy metal and the far-reaching legacy of horror cinema.

In addition to your new story notes, Darkest Hours: Expanded Edition also comes with 17 essays on horror cinema. As someone who has written extensively about cinema for years, how did you go about selecting which essays would be included in this collection?

Mike Thorn: I’ve written criticism on all kinds of cinema, but I only wanted to include essays on horror films in Darkest Hours: Expanded Edition. I aimed to mainly foreground pieces that I wrote around the time I was producing the collection’s fiction (with a few exceptions). I also sought to highlight some of the filmmakers who have influenced my sensibility: Tobe Hooper, Rob Zombie, Wes Craven, Dario Argento, George A. Romero, and M. Night Shyamalan, among others.

Are there any stories in Darkest Hours that you would love to see adapted for film?

Mike Thorn: Absolutely! I think “The Auteur” and “A New Kind of Drug”, in particular, are ripe for adaptation, but I’d love to see any of these stories adapted for film.

Darkest Hours: Expanded Edition features a foreword by Sadie Hartmann (aka Mother Horror), new cover art by Mikio Murakami, and a great blurb by filmmaker Jamie Blanks. What has it been like to have such great company supporting your latest release?

Mike Thorn: I’m beyond grateful. Sadie is such an amazing champion within the horror fiction world, and she has always been so gracious in her support of my work. It’s an honor to have her foreword included in this expanded edition.

I have always been a massive fan of Jamie’s work, so it felt surreal when he and I first connected—shortly after he and I initially started communicating, I sent him a photograph of me wearing an Urban Legend t-shirt! I see him as one of the most vital auteurs to emerge out of the post-Scream genre cinema landscape, and I feel absolutely blessed to call him a friend and creative collaborator. I admire him a great deal.

And Mikio Murakami is a phenomenal designer and artist. I couldn’t be happier with the cover he did for Darkest Hours: Expanded Edition.

Darkest Hours: Expanded Edition is published by JournalStone, who previously released your debut novel, Shelter for the Damned. What has it been like to work with JournalStone across multiple projects?

Mike Thorn: I love working with JournalStone. They are an exceptionally supportive team, and they are always open to my ideas around design and promotion. I correspond most often with the managing editor, Scarlett R. Algee, but I’ve had nothing but pleasant exchanges with the president, Christopher Payne, and editor Sean Leonard.

Ultimately, what do you hope readers take away from Darkest Hours: Expanded Edition?

Mike Thorn: My hope is that these stories distress readers in the most positive sense. I strive for straight, visceral affect in my fiction, but if readers also connect with the book’s emotional and psychological gradients, that’s even better!

In addition to Darkest Hours: Expanded Edition and your upcoming short story collection Peel Back and See, are there any other projects that you’re currently working on that you can tease for our readers?

Mike Thorn: Jamie Blanks and I are batting around a few ideas for the screen, which has been an extremely invigorating process. I’m also writing an essay for an anthology on the history of Weird Fiction, in which I’m exploring my own work’s allegiance to that tradition; I’m drawing a lot on Black Metal Theory in that piece. And my second novel is always simmering away on the backburner, too…

Thank you again for your time, Mike!

Mike Thorn: Thank you likewise, Derek! I really appreciate it. 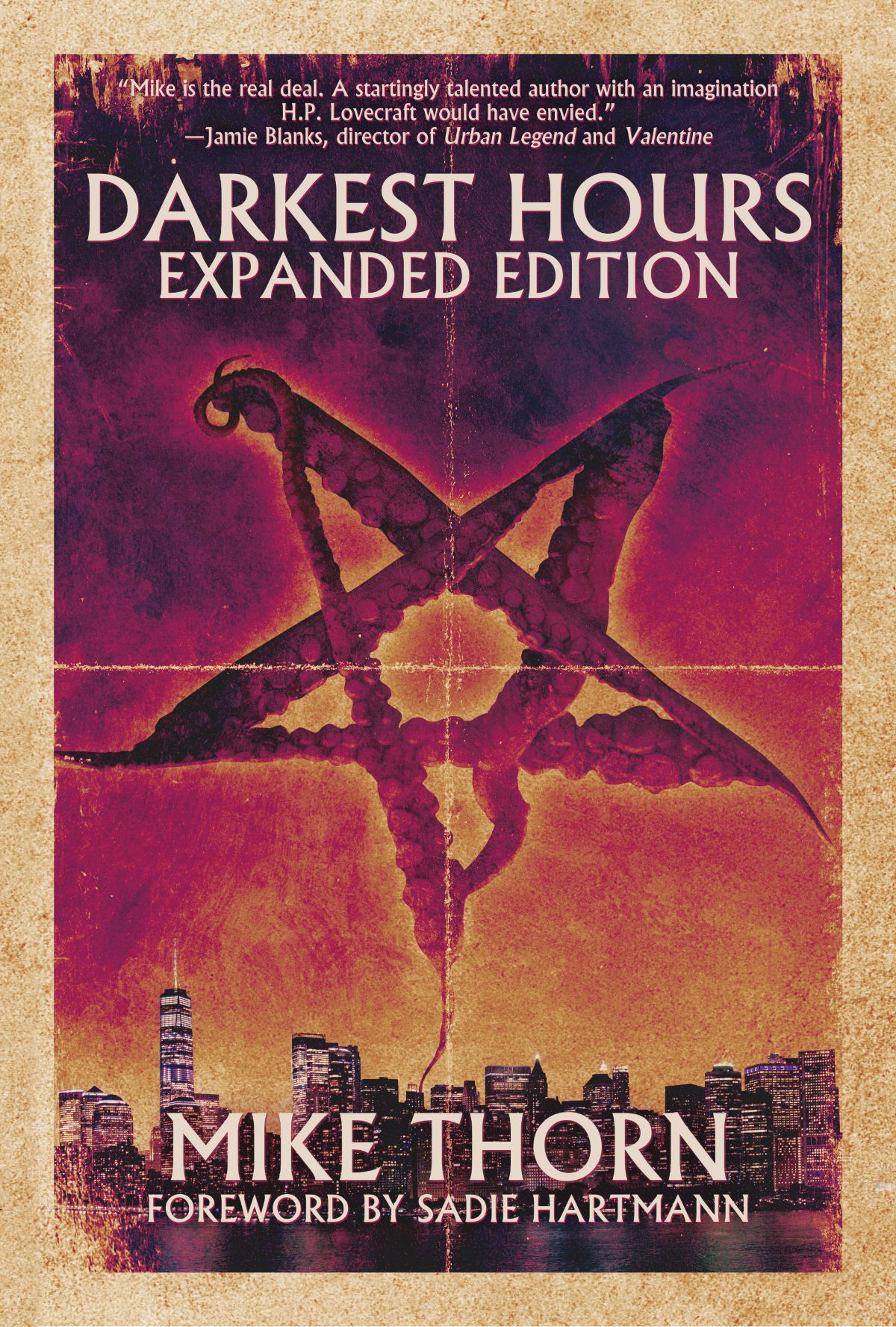